END_OF_DOCUMENT_TOKEN_TO_BE_REPLACED

In addition to the popular Easy Calculator, now users of Android devices can download for free our Easy Calculator Pro. This application combines simple and scientific calculators and also has a lot of useful features aimed to simplify your everyday calculations, such as calculation of tips, taxes, pocker combinations, time between various dates and many many more. Meet our new exciting game Bee Brave. The goal of the game is to help the Bee get home safely after a terrible storm has thrown her into unknown lands. Without your help Bee won’t cope with many enemies and will never see her sweet hive.

We did our best to make the game very kind and simple, so the whole family can spend hours playing it. 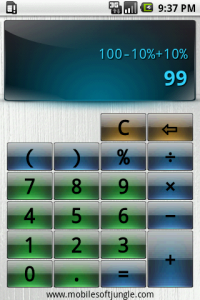 Easy Calculator is probably the best calculator for everyday use. And it’s free!

Unlike thousands of ordinary office calculators this one lets you easily cope with complicated expressions and always keep an eye on the input data.

If you did calculations some time ago, you can always turn to calculation history.
With advanced percent calculation you can easily define the price with discount or extra tax or count tips at a restaurant.
See yourself: for example, to figure out the cost of lunch for two people just enter the following:
12 + 5.80 + 18 + 6 + 10%) / 2
Note that you forgot to open the bracket in the very beginning. Doesn’t matter, Easy Calculator takes care of it!
You see all the prices in the bill and there is no need to input everything again in case you missed something. And finally you can add a memo note to this expression, i.e. ‘John didn’t pay so he will buy me a beer next time :)’ 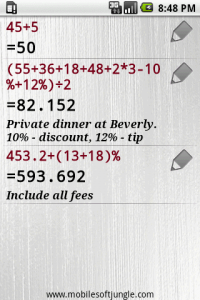